Many of TJI’s customers have established long-term strategic relationships with Tony. In these situations, Tony takes on the title of strategic partner rather than just coach. In this role, Tony helps customers build value for stakeholders in their respective enterprise(s). As a strategic partner, Tony relentlessly focuses his energy and influence to drive his clients’ brand to higher market share percentages and build equity for both stockholders and partners.

In the early 90’s, Tony was contracted to help turn Chrysler around. Some may recall that in 1991 the LH vehicles were considered Chrysler’s ‘last hope.’ A bold vision was created, a culture change was planned, and heavy execution took place over the following several years.

The vision was not only to turn Chrysler around but to also transform them into one of the greatest companies in America.

Tony was deployed around the world to help Chrysler’s presidents in dozens of countries rebuild and strengthen their company. During his second year working with them, Chrysler was paying Tony over $2 million a year for his expertise. After all was said and done, Chrysler was on the front of Forbes magazine in 1997 as the most admired company in America. A few months later, the Daimler-Chrysler merger occurred. Five years of focused effort resulted in a business deal few could have even imagined when Tony was first hired.

It is rare to find a resource capable of combining strategy and tools in a way that produces clarity and focus.  Tony Jeary is that rare resource.  This guy is on 24/7.  If you are seeking a strategic resource that has the proven tools and processes you need to support the execution of your vision in the marketplace, look no further than my friend, Tony Jeary.

Over the last several years, you and your team have helped Amway, and me personally, in so many different ways.  As a coach, as a group meeting facilitator, as a strategy partner, and as a friend, you have added VALUE.  Time with you have been well spent and has helped me and my Executive Team lead and grow Latin America…Clarity, Focus, Execution.

I want to thank you for the contributions you have made to SOURCECORP as we have grown from a start-up to a $400 million public company in the last nine years.  I believe one reason you are so effective for us is the fact that you are always very prepared, do your homework ahead of time to identify how to deal with issues important to the audience, connect to the audience in a relevant manner and are flexible enough to address new issues that develop during the session.

I’ve been a fan of yours for awhile, even before we met. I have a blog where I share my recommendations on books and articles on professional and self-development. Turns out, I had already shared one of your contributions in Success this year. I will continue to follow you and share your wisdom with people I know. It was a pleasure meeting you. 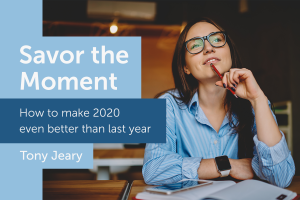 At the end of last year, I was invited to Scottsdale, AZ to be a guest speaker for my friend Tony Martinez and his business partner Sean Higgins. Tony and I visited both on stage and afterward about how to make 2020 even better than the year before. The main thing we concluded was to […] 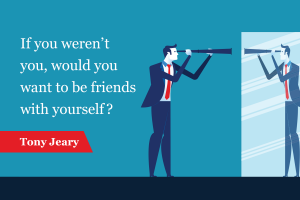 What is your vibe? Take a moment to assess yourself and the vibe you give off.  Here’s the definition, according to Merriam-Webster:  Vibe: a distinctive feeling or quality capable of being sensed This distinctive feeling that others can sense from you is vital to your success. I believe when you possess a high energy vibe, […] 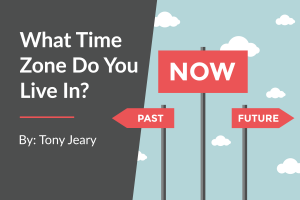 My wife and I were having a discussion the other night at dinner that sparked my interest and inspired me to write this article. We typically arrive at topics for these articles from best practices and concepts that come out of our studio sessions with clients, but this one came from an unexpected dinner conversation. […]